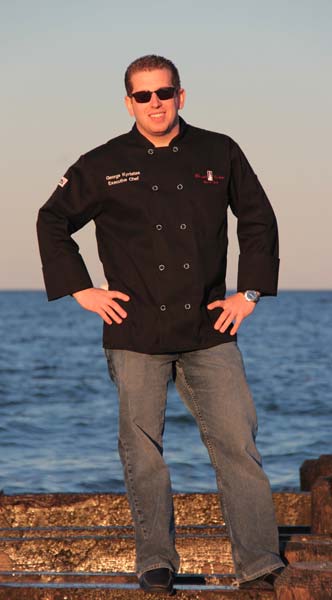 Having held a steady position in the American media for nearly a decade, he is nationally known for his food styling and photography, his warm and approachable personality, and his simple, easy-to-follow, award-winning recipes.

George has been a guest chef on many national and international television programs, Flavors of America, 10!, Fox and Friends, Food Network’s Cutthroat Kitchen, and countless other tv and radio demonstrations. George was also the host of his very own cooking show, “COOKING WITH KEFI”, which aired internationally on Mega Cosmos via Greek Satellite Television. George has also been featured in countless magazines throughout the world such as Chef, Playboy, and Plate, to name a few. He has also been a contributor in magazines such as JerseyMan Magazine and Greek Circle.

Chef Kyrtatas’ unparalleled knowledge and his unending love of foods from around the world make his cooking style untouchable. He brings his knowledge to his cooking and understands that in order to make the meal work he must allow the ingredients to speak for themselves.

Chef Kyrtatas’ culinary career started at the young age of 8 when his parents entered the restaurant business. George then entered and graduated from the Academy of Culinary Arts with a gold medal. George was also the youngest person ever to become a Certified Chef de Cuisine from the American Culinary Federation ( age 20 ). After graduation, George went into the family business. Even though George had a job, he wanted a career. Through hard work, George did just that. In January 2011, George was voted (in Greece) as one of the top 4 Greek Chefs in the world. In December of 2011, George was voted by a panel of his peers as one of the Top 5 Chefs in New Jersey. In 2015, George became certified as a Master BBQ Cook. In 2015, George won the Hospitality Award for the State of NJ from the NJRHA. In 2017, George was the Culinary Honoree at the Atlantic City Restaurant Gala. In 2017, George was inducted into the Chaîne des Rôtisseurs, and in 2018 he was Voted TOP 40 under 40 in NJ Business and also in 2018 inducted into the Hellenic Chefs Association. ( Greek Chef Club ). In 2019, George became the United States ambassador to Greece for Gastronomy. Also in 2019, George became a Whiskey Ambassador to Scotland. Most days Chef George Kyrtatas can be found creating new and exciting dishes at SweetWater Bar and Grill.